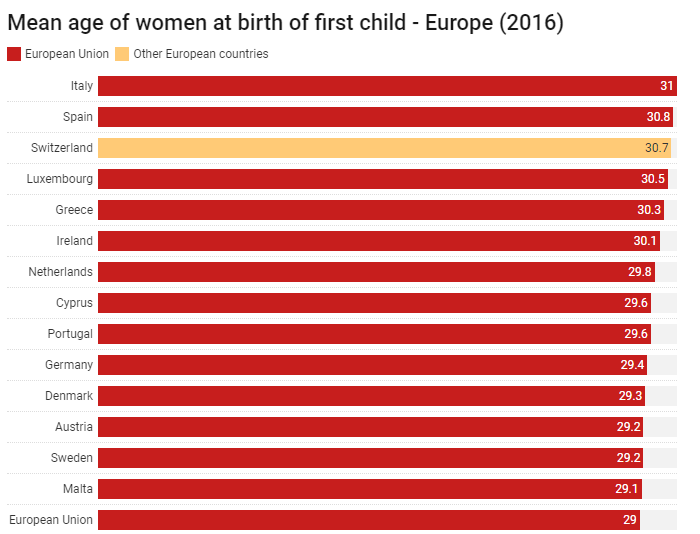 Motherhood involves adapting to a new reality that is ambiguous and requires a series of strategies that will be influenced, among other aspects, by women’s personal conditions, their beliefs and attitudes towards motherhood or the context and social conditions that surround them.
The following article shows, based on the information collected, that around 5% of first births in European countries were to mothers under 20 years of age; in contrast, 3% of first births were to mothers over 40 years of age.

© Need to Connect. The European Commission's support for the production of this publication does not constitute an endorsement of the contents, which reflect the views only of the authors, and the Commission cannot be held responsible for any use which may be made of the information contained therein.
Imprint & Data Privacy Statement

You can find out more about which cookies we are using here.

This website uses cookies so that we can provide you with the best user experience possible. Cookie information is stored in your browser and performs functions such as recognising you when you return to our website and helping our team to understand which sections of the website you find most interesting and useful.

This website uses Google Analytics to collect anonymous information such as the number of visitors to the site, and the most popular pages. Keeping this cookie enabled helps us to improve our website.

Strictly Necessary Cookie should be enabled at all times so that we can save your preferences for cookie settings.

If you disable this cookie, we will not be able to save your preferences. This means that every time you visit this website you will need to enable or disable cookies again.